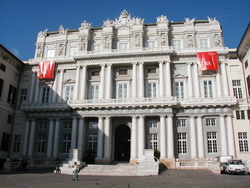 The History of Liguria

Liguria has a rich history. From the Paleolithic era, about 80,000 years BC, the traces of the first inhabitants are found in the caves of Toirano. These are the first paintings on the walls reflecting the cave bears and also the migration of the dwellers and animals. Later the Ligurians lived there and, however, left a few traces of their life. Their settlement was the largest of those times in the region.

Genoa was a Greek and Phoenician important trading port and the center of the history of Liguria. Around 200 BC the entire region was united under the Roman domination. In the Middle Ages it was for some time even more powerful than the Serenissima Venice. People can now see most of the certifications of this era. The first one is Genoa with its biggest City in Europe. There is located San Lorenzo church from the 13th century with a black and white marble in a Gothic style, an impressive Palazzo Ducale and the Doge's Palace with its 2 courtyards. The City also includes Sant' Andrea convent of the 12th century with a splendid arcade and the Porta Soprana with its 2 mighty towers loom far into the sky. Like palaces of the royal palace, the Palazzo Bianco and Palazzo Rosso have wonderful old photo exhibitions of paintings of the leading artists of those times. Dolceacqua is a long narrow arch bridge over the Nervio that leads to an outstanding castle of Doria in the underlying village. Cervo creates an atmosphere of few centuries ago times with its narrow streets and the beautiful baroque churches. But even places like Cinque Terre, Portofino and Rapallo haven’t lost their medieval look; colorful houses cling to the hillsides and the feel of nostalgically of glorious times.

During the times of Napoleon, the entire territory of France was quickly enlarged and that’s why Liguria finally lost its independence and became a part of the Kingdom of Sardinia. It had never fought for the independence and shortly thereafter Liguria was given to the United Kingdom of Italy. A journey through the history of Liguria during a holiday is an experience of the glorious periods of the past.