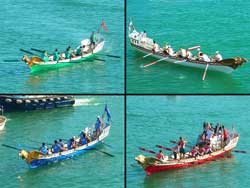 White boat for Genoa, green for Venice, red for Pisa and blue for Amalfi.
(0) marks: 0

The Genoese team is going to compete for the first place in the regatta of ancient maritime republics (La Regata delle Antiche Repubbliche Marinare), which this year will be held on June 12 in Venice. Four cities traditionally take part in the regatta: Genoa, Venice, Pisa and Amalfi. Since 1956 the regatta is held annually in turn in these cities, which in the past were four maritime republics.

The regatta is a rowing competition, which is preceded by a spectacular costumed parade. Team fans and visitors from different Italian regions, as well as foreign tourists, who spend their holidays in Italy, come to see the parade. Taking into account the fact that the regatta will be held in the Venetian lagoon, it is advised to book accommodation in Venice in advance due to the large number of tourists. On our portal veneto-net.com you can find a suitable hotel in Venice or on nearby islands of Lido or Murano lagoons. You can also visit such popular seaside resort towns as Chioggia, Lido di Jesolo and other beautiful places near Venice.

Each city prepares one crew. The competitors must to overcome a straight 2-km distance. Each team consists of one helmsman and eight oarsmen. All boats are designed by the Italian master Giovanni Giuponi and manufactured according to the common standard. The boats must not exceed 12 meters in length and must weigh over 760 kg. Before the race starts the boats must be weighed. For greater efficiency and lightness boats are made form fiberglass. The shape of each team and the boat must be different in color and have its own sign. Genoese symbol is a dragon, and their characteristic color is white. The emblem of the Venetian boatmen is a winged lion, while the color of the boat and clothes are green. Amalfi team is protected by the winged horse and the color is blue. Rowers from Pisa dress in red and their symbol is an eagle.

The winners are awarded with gold medal, prize and trophy, which is made by the Florentine jewelers from gold and silver. It is made in the form of a sailing ship, standing on four marine horses symbolizing the ancient republics. The winners keep the trophy during the year and after the next race goes to the new owner.

Tourists pay special attention to the historic parade. Many companies arrange special tours during the regatta for vacationers, who want to see this spectacular large-scale Italian costumed show.

About eighty people from each city dress in beautiful historical costumes and reproduce the scene of one of the most important historical events for this country. Venetians present such characters as Caterina Cornaro, the Queen of Cyprus, who passed the Kingdom of Cyprus to the Venetian republic in 1489, the Doge, ambassadors, distinguished ladies, military men, senators, commander in chief of the Venetian navy, etc. Genoa reproduces the events of the First Crusade. Here important persons are the head of the Genoese fleet, chronicler Caffaro di Rustico, crusaders, merchants, military officers, bishops, ordinary people, etc. Amalfi presents events of the XI century. In the procession will take part the Duke John I and his wedding cortege, knights, soldiers, judges, courtiers, etc. Pisa demonstrates such representatives as senators, bishops, mayor, military men, ambassadors, the head of the Navy, girls in wedding dresses and Cindzica de Sismondi.

Genoa will host the regatta of the maritime republics in 2014.