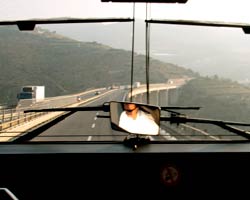 If someone is eager to travel by car during his holiday vacation and also like to be mobile on the spot, it is absolutely recommended taking the green card insurance. It is also important to hold on the existing speed limits as the police rigorously punish the drivers who violations the rules.

Driving on the roads of Liguria is free, but those who want to use the highway must pay fees. You can pay either in cash or by the Viacard. It is interesting that only in the larger sections of the motorways there are separate lanes for the payment. Usually there are three ways. The first: you pay in cash at the counter; the second - you pay with Viacard and the third - you buy a full electronic debit. But this is only possible for Italian cars and the track is marked with the word TELEPASS. Those who are wrongly classified, for example, can simply ring to the machines operator and the support will come relatively quickly.

The Viacard is used not just in Liguria; it can also be used throughout Italy. The card is available, for example, in the offices of the Automobile Club. Once purchased, it also keeps its validity in subsequent years.

The tourists who have rest in Italy quickly get the impression of a rather chaotic transport system on the roads in Liguria. Nevertheless the car accidents happen there quite seldom due to the careful drivers.

Who wants to leave the car, should take valuable things from it. Unfortunately, it is not unusual for cars to be broken by tourists. Who leaves valuable things in the car, risks by his insurance coverage.

The only thing the tourist can't avoid while traveling by car in Liguria is the horn. The Italians are definitely happy to use the horns in their cars, but this mustn’t be reflected on the tourist drivers. It is often hooted simply out of anger. The tip: don’t assume it and do not irritate.