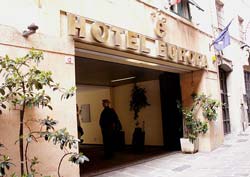 Who wants to spend his vacation in Liguria will have a wide choice of possible accommodation. Apart from the offerings for holiday vacation, there is still a number of large and small inns and hotels of various categories. A holiday at the hotel has some advantages. One of them is the food, because as a rule, at least breakfast for the night is included in the hotel service. The hotels are of different categories, which mean that the tourists with rather small claims will find their hotel, as well as those, who come there to spend a luxury vacation. Naturally, the prices will also vary according to the service.

There are many hotels located right in the downtown in large cities. That need not be meant, however, that there are also loud places, as they has a central location but there’s a great advantage in terms of the accessibility of various tourist attractions or other destinations. In Genoa, for example, there is the four-star Hotel Moderno Verdi, which also allows visiting many attractions. It is located in the heart of the city and there is an ancient palace not far from it. The atmosphere is beautiful there.

The Biorelais Sauvage hotel is located in the town of Bordighera and is highly recommended for the tourists. Here the tourists will get pleasure both from the sea and the undulating landscape of the region. You can have your dinners directly at the hotel, as the menus are generally comparable to those of local restaurants.

Also you can spend your holiday in a spa hotel in Liguria. If someone wants to relax in one of the hotels he will find it without any hesitations. Athletic and active people are, perhaps, interested in a golf vacation. Again, there are some golf hotels, which have one or more connected courses of different sizes. If you are not permitted to attend special closed courts, you always can go to a public court, although smaller, but still very nice to play.

Photo: (under –°–° for commercial work) pdug/flickr.com