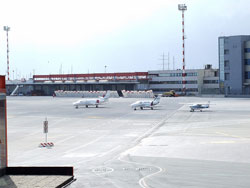 In Liguria planes normally arrive in Genoa airport, the only international airport of the region. The international airport is called Genoa Aeroporto Genoa-Sestri "Cristoforo Colombo". The airport of Genoa (IATA: GOA) is located in Genoa-Sestri and was built by an embankment of a sand bank, which led to the sea. The airport covers an area of more than 130 hectares. The landing and runway is two and a half kilometers long. Ground and air services are efficient and comfortable. Cristoforo Colombo is used by many scheduled flights, for example, the Lufthansa flights here from Munich and, of course, there are Alitalia flights, too. It is also the landing for the so-called low-cost airlines such as Ryanair, Condor, Myair or Airone. The Genoa airport is open all year round and it is just about six kilometers from the city of Genoa.

Thanks to the small airport Rivier Airport (international airport shortcuts ALL) tourists can also get to Ligurian Albenga by plane. This airport with the Italian name Areoporto Internazionale di Villanova d'Albenga "C. Panero" is only about 7 km away from Albenga and used especially for Italian domestic flights and landings of scattered charter flights. Besides, the private jets of the rich people land and take off from this airport. The runway is about one and a half kilometer long and it’s shorter than the one in Genoa airport. This is also the centre of flower export in addition to the tourist air traffic.

The military airport is located in Luni. It is open only partially for the civil aviation.

For the holiday vacation airports outside Italy can also offer their flights. Thus, almost all airports in the French Riviera are interesting. From Nice airport, for example, you can take the train to Imperia. The cost of the shuttle train ticket is under 20 euros which is very low.