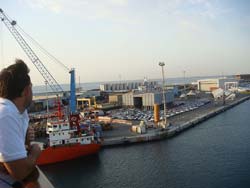 With the cruise ships of the shipping line Costa Crociere Savona got the name of a cruise port. Now Savona is the centre of the American Carnival Corporation that owns Costa Crociere. Also, the German sister company - AIDA Cruises - is the group belonging to the cruise terminal of Savona. The cruise port of Savona is often used as the starting point for one or two Mediterranean cruises. Many travelers combine their vacation on the Italian Riviera with a cruise, which starts in Savona. Also, the second port in Liguria is one of the ports of departure of Costa Cruises. For the guests of their cruises, who travel from Genoa, Costa Crociere offers a separate VIP lounge.

Before such a cruise Savona is suitable for a short visit. The historic centre of Savona was in Priamar, a fortress on the sea. Today's urban centre is located a bit north, but the fortress along with the ceramics workshops in Albisola and glassworks altars is a popular tourist destination. The medieval buildings such as the Church of San Giovanni Battista of the 16th century and art gallery at the Palazzo Pozzobonello and artistically designed buildings dominate the skyline of the cruise port of Savona. An architectural highlight for the visitors is the Cathedral of Santa Maria Assunta, which was built between 1589 and 1602. From 1881 to 1886 the facade of the church building was significantly changed once again. The tower named after the sailor Leone Pancaldo, located in the harbor is the testimony of the long sailing traditions in Savona.

The beautiful and contemplative port city of Savona is located on the Riviera coast of the Italian region of Liguria. Through the open location of Savona tourists can view the entire city. Even in the stories of the Greek historian during the Punic wars a port city of Savona was mentioned as an ally of Carthage. Over the centuries the charming city on the Riviera turned from the port to a vibrant centre from where ferries to Corsica and ships all over the world are sailing.

The beautiful sandy beaches also invite to spend some time in Liguria. The idyllic holiday houses or a small hotel with typical Italian ambience offer very good accommodation. The friendly nature of local people and the sunny mood of the sailors of Savona make it a worthwhile holiday.

Photo: (under –°–° for commercial work) dlisbona/flickr.com