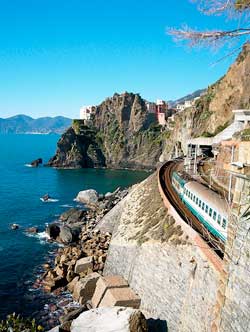 As almost the whole Italian territory Liguria has a well-developed network of public transport. Those who travel in the region during the holiday do not necessarily need to have a car in order to be mobile. Buses and trains run regularly in the major cities, plus there is the wide network of subways and the Metro. Moreover, the public transportation is much cheaper than the using of the car. No matter if your accommodation is just outside the large city or far away from the bus station, you can quickly reach your destination by taxi.

In Liguria, all four provinces are linked by the excellently planned rail network. Almost all the cities of the region are covered by the railroad and are easily accessible. In addition, both the main sites of the hinterland and the locations of the coast are connected with each other. So Genoa is directly accessible from all major cities. It requires just two hours from the travelers to reach their destination from Milan or Turin. The most important station of Liguria is Genoa. The tourist traffic here is heavy in the direction of the airport of Genoa - Sestri and the ferry port. You can easily get to such cities as Milan, Florence and Bologna from this station.

Also the country's main city of Rome is easily accessible. It requires about five and a half hours reaching this city from Genoa. The two major railway stations are called Genoa Piazza Principe and Brignole Genova.

Of course, even smaller towns are reachable by train if it is located on the way to a larger city. But even if the train does not directly reach this place, it usually stops in a neighboring village, from where you can easily reach your destination by bus.