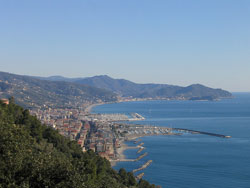 Chiavari is a city in the Italian region of Liguria, which belongs to the province of Genoa. The city stands between Rapallo and Sestri Levante on the Gulf of Tigullio just at the mouth of the river Entella. Chiavari is the seat of a bishop that’s why it has a significant library of about 50,000 volumes. In Chiavari there are also several high schools and a gallery (with paintings of the Genoese artists from the period since 15th century to the present days) at the Palazzo Torriglia.

The excavation has recently discovered in Chiavari a dead city of pre-Roman times. But this place has a lot of other interesting sights. One the worth visiting places is the Basilica dei Fieschi in the Romanesque-Gothic style. Directly in the Old City is located "portici neri", which is nicely made and also shows many winding lanes and picturesque arch courses. There are plenty of beautiful accommodations for the tourists as well as holiday houses and hotels. Here you can also relax when returning one evening from a strenuous hike from Cinque Terre. Many visitors take Chiavari as a base and walk every day to one of the magical five villages. In the evening you can quickly get to the train. There are also located the Palazzo Torriglia with its impressive art gallery and the ruins of the Count Lavagna castle. The earl wasn’t really a friend for the local people but after his death it was publicly announced that the part of the castle was now free to visit. But in the turmoil of the Middle Ages the castle was destroyed so today the tourists can only visit the ruins. This castle can be comparable with the ruins of the Palazzo dei Fieschi, which were also destroyed by the Saracens in 1567.

Photo: (under –°–° for commercial work) vengomatto/flickr.com