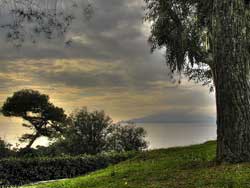 The small Ligurian town of Lavagna near Genoa is the capital of slate. This stone is cut and processed in the nearby Val Fontanabuona. Slate also shapes the medieval city with the shady arcade passages. In addition to a very nice slate Chapel of Santa Trinita built in the 15th century there is also a wonderful picture of Madonna in slate of the 17th century at the arcades. Many art treasures that the city has to offer are also impressive. From Piazza Marconi to the Collegiate Santo Stefano leads a spectacular staircase made of colored pebble. The church is one of the most important buildings in the city. It was found in 1653 on the fundamental walls of the church dating from 944. It is rich in the finest marble works and is decorated with the paintings of Bernardo Strozzi and Domenico Piola, including the "Crucifixion" in the choir. The oratorio of Nostra Signora del Carmine, which was built in 1631 is also worth seeing. Here you can admire not only the paintings of Domenico Fiasella and De Ferrari but also lots of other great painters.

Those who are bored of culture can relax in one of many small restaurants in the Old Town. Here is also possible to visit small shops and boutiques that are located in the picturesque old houses. The port of Lavagna is also spectacular as it is one of the largest ones in the entire Mediterranean. Since 1600 it berthed focal point for ships and yachts from all over the world. Here you can spend hours watching the milling and the sea breeze blowing into the face. Anyone can book a boat trip along the coast or an adventurous trip to the deep reservations. The beaches of Cavi di Lavagna invite for swimming and water sports.

Lavagna also provides an ideal starting point for excursions through rural Liguria. The Monte San Giacomo and the Val Fontanabuona impresses by its natural beauty. This place is also called the Ligurian Apennines by some people as it is still wild and untouched.