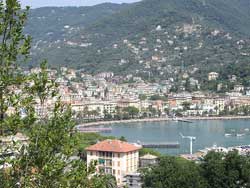 Rapallo is a small and very beautiful town in the north-west part of Italy, located in the Liguria region of the Genoa province. Rapallo is one of the most popular resorts of the Riviera di Levante - the Italian part of the famous Mediterranean Riviera, stretching along the coast of the Ligurian Sea from Cannes in southern France to the Ligurian resort of La Spezia.

Rapallo, like many other resort towns of the Mediterranean Sea, is famous for its picturesque natural scenery, mild climate and clean beaches. Azure sea, palm trees, abundance of flowers, luxury yachts, many restaurants and cafes along the quay and narrow green streets with colorful houses make Rapallo the favorite place for holidays.
In Rapallo there are many cozy apartments, cottages, hotels and luxury villas located on the hills overlooking the wonderful coast. If you're planning to vacation in Rapallo, or travel along the towns of the Riviera or decided to stay here for a couple of days, on our portal ru.ligurien-netz.de you can find comfortable accommodation options according to your needs and finances and book a hotel or a villa online.

In Rapallo everyone will find something interesting. Golf amateurs will appreciate the golf course of the "Rapallo" club. Clubbers will enjoy night clubs and discos. There are also available fascinating hiking and horse trips. In addition, you can go on excursion to the nearby resorts. Just 30 minutes by boat and you will be in Portofino - another heavenly place of the Ligurian Riviera.
The city has a very rich history. Rapallo is known as a place of signing two important agreements for the Italian government that were signed here after the First World War. In 1920 the Kingdom of Serbs, Croats and Slovenes (Yugoslavia) and the Kingdom of Italy signed an agreement, which settled territorial disputes over the territory in the northern Adriatic Sea coast, which arose after the collapse of the Austro-Hungarian Empire. The treaty of Rapallo in 1922, signed between the Weimar Republic and the RSFSR put an end to the diplomatic isolation of Soviet Russia.

During the long period of its existence Rapallo was often attacked and repeatedly destroyed and looted. In the 16th century to protect the city against the pirate attacks in Rapallo was build a castle (Castello di Rapallo), which still majestically stands on the seacoast and is a symbol of the city. This is one of the most crowded and popular beach areas.
We also should note the sanctuary of the holy Madonna Montallegro (Santuario di Nostra Signora di Montallegro). The temple is situated on a hill 612 meters above sea level. The Basilica of the Virgin Mary di Montallegro can be reached by mules, cars or by cable car and during the lifting tourists can enjoy spectacular panoramic views of the Tigullio Gulf and the Old Town of Rapallo. Madonna di Montallegro is the patroness saint of the city. Annually during the first three days of July in her honor in Rapallo is held a huge festival with spectacular fireworks.

Among the many attractions in Rapallo especially interesting is the church of St. Stephen (Pieve di Santo Stefano), the Torre Civica tower, Torre dei Fieschi tower, Oratorio dei Bianchi chapel, the Church of St. Francesco (Chiesa di San Francesco), Hannibal’s stone bridge, standing on a cliff Castello di Punta Pagana castle and others.
One of the most popular places among tourists is the Tigullio villa, where is located the museum of lace (Museum of Merletto), which keeps a huge collection of rare lace products of XVI-XX centuries.

Interesting collections of gold, ivory and porcelain, paintings and sculptures can be seen in the Attilio and Cleofe Gaffoglio Museum, located in a former Convent of the Clarissa Sisters on the Libia Square.