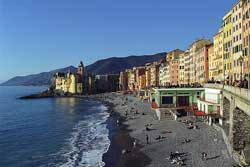 Camogli is one of the most famous fishing villages of the Riviera di Levante in the Golfo Paradiso to the west of the promontory of Portofino. The main sight of Camogli dates back to the 18th century when there was built an old pier by the Republic of Genoa. The strong colors and decorations of the houses along the pier impress the tourists. They tell about the wealth of the ancient city. In the previous century Camogli was not just a fishing village but the place of ship-owners and the global trade routes. The memories of this glorious time are preserved to the present time: in Camogli there is still the craft production of ship models.

In Camogli there are still fishermen who actively fish in the waters. The fishermen at work can be seen in the tunny- fishing area in Punta Chiappa. On every second Sunday in May there is prepared the dish on the largest pan in the world. In Camogli on the occasion of the feast of San Fortunato, along with San Prospero, who is the patron saint of the village, there are held big celebrations on this day. The festival offers also good opportunities to try the Camogliesi made from crumbly pastry and are filled with Rumcreme and this could be considered as a speciality of Camogli. The body of the Holy Fortunato and other relics of saints Prospero are kept in the parish church of Santa Maria Assunta, which was built in 12th century on the small peninsula. After that in the 12th century there was also built the castle della Dragonara. The castle della Dragonara was destroyed in the course of time and rebuilt for several times.

On the sea bottom of Camogli is located interesting places for the divers. The most popular of them is famous Christ degli Abissi (Christ the seabed) thrown into the sea in 1954 by the sculptor Guido Galletti and dedicated to the sailors.