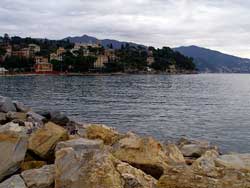 The city of Santa Margherita Ligure is suitable for traveling alone as it offers a lot of sights. Santa Margherita Ligure can offer many accommodations in the elegant old mansions. The town has a long history. The golden age of Costa dei Delfine began very early caused by the construction of the villas and fabulous hotels, which nowadays are popular among the tourists as the magnificent sights and as well as the beautiful accommodation. After the Second World War Santa Margherita Ligure (also known as the pearl of Tigullio) like Portofino and Paraggi has become more and more popular tourist destination due to its rich cultural heritage and atmosphere.

Santa Margherita Ligure has many historical buildings. One of them is the Basilica of St. Margaret of Antioch that is characterized by a Latin cross and a remarkable Dome. Here is also located the Church of St. John that was built in the historic Old Town near the Court. The current building dates back to the year of 1582 and still preserved the interior of the baroque style. The abbey of Cervara forms a complex, which is famous for its rich and dense vegetation. While visiting Santa Margherita Ligure it should be interesting to visit it especially its interior. The Villa Durazzo-Centurione is not far from there and it is a two-villa complex formed by Durazzo-Centurione and San Giacomo, which remind a castle with a very interesting garden design. A well-known "Vittorio John Smith" museum is located in the Villa Durazzo and is dedicated to famous writer and journalist John Smith.

Every year in the city is held a great variety of cultural events. So many guests come just because of the Carlo Negri Cup. It is an international sailing race, which is annually organized by the Yacht Club. One more thing which is very popular among the visitors is the competition of the whole city for the Palio trophy.

Photo: (under –°–° for commercial work) Sonietta46/flickr.com