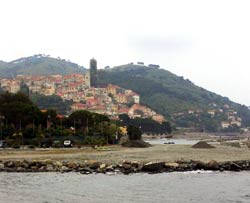 Cervo is an Italian town with a population of about 1200 people that is located in the western part of Liguria, directly on the Gulf of Diano Marina. Cervo belongs to the province of Imperia and it is one of the most beautiful places in Liguria. The houses stand on a hill and are nestled closely to each other. At the entrance of this small town is located the parish church of San Giovanni Battista built in 1720 in the baroque style. The necessary funds for building this church were provided by the coral fishermen. The old town with its winding streets and steep climb are free of cars. Only pedestrians are allowed to walk here. The plants and flowers in the streets are very pretty. On the top of a rock here is situated the Clavesana Castle. Long time ago it was built for the defense and now serves as a local history museum.

Another attraction in Cervo is the Via Aurelia built by the Romans. Earlier this street was passing alongside the coastal region from Rome to Pizza, later it was widen to France and Spain. Today only separate fragments of the Roman army street could be found.

Every year during the last 40 years the festivals of chamber music take place in Cervo on the square in front of the church of San Giovanni Battista. Well-known international orchestras and music ensembles participate in it. The Piazzetta Dante is located in the center of the Old City of Cervo. It becomes a meeting place for lovers of all kinds of music from classical music to jazz during August and September.

On the way through olive groves and pine forests can be found rest and recreation facilities, which don’t exist in the everyday life. From Ciappà Park there is a fantastic view of the Gulf of Diano. Cervo is an ideal destination especially for campers as there are six campsites working here. These are located directly on the sea and the small bays are ideal for swimming and snorkeling.

The evening can be spent in one of the restaurants with a bottle of good wine. Local restaurants can also boast of their great variety of delicious fish dishes.