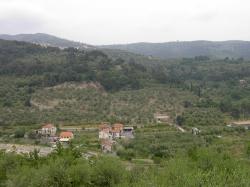 Little farther from the coast of San Bartolomeo is situated the old hamlets of Rovere and Poiolo. The first one got its name from the sanctuary Della Rovere, a major religious site in the western Liguria. The neoclassical facade is a longitudinal apse of the church nave and two minor ships. Outside the church there is a bell tower and the gate with bas-relief. In the church are kept many icons of the Virgin Mary. In the environs can be found the traces of old times. After a few archaeological excavations there were found many remnants of Roman antiquity. Apart from the church there is located the baroque oratorio of San Michele, the headquarters of the San Carlo's Order. The villages and hamlets further away from the coast are still waiting to be discovered and form a landscape of plains and hills.