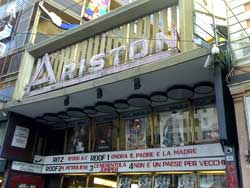 San Remo is an Italian resort, which is located in Liguria. It is located only about 20 kilometers from the French border. In addition to the flower market and the casino, San Remo is especially famous for the annual San Remo Music Festival. If anyone wishes to spend a holiday in San Remo, he is strongly recommended to plan it so that to see the famous San Remo Music Festival.

The San Remo Music Festival is the oldest music festival in Europe. It takes place since 1951 and is an annual event. The festival has a great popularity until nowadays and it is a major event not only for the locals. In 1950 -1960s it was a major music event in Europe. However nowadays it has a great national importance for Italy only. The San Remo Music Festival takes place in late February or early March and continues over a period of 5 evenings from Tuesday to Saturday.

The popular San Remo Music Festival is yearly shown on the state RAI television, which means that the festival lives on television transfers for many years. A special feature of this festival, in contrast to other events of this type, is certainly the fact that each festival winner is chosen. The jury consists mostly of music experts and of the people who have come here from all over the country. The Festival unites the participants of different music genres. Well-known artists and stars as well as unknown artists and talents perform on one stage. Some winners of the San Remo Music Festival became real super-stars, like Al Bano and Romina Power, who were the winners of the festival in 1984 or even Eros Ramazotti who was the winner in 1986.

Of course, there are many accommodation offers in San Remo and its surrounding area, so the travel to this area is certainly very attractive.