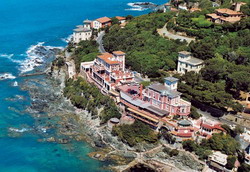 The Ligurian Via Aurelia is a part of the Roman Via Aurelia: a road project that has already been tackled in Roman times by Gaius Aurelius Cotta around 241 BC. It stretched from Tuscan Pisa to Ligurian Luna, a district of today's Ortonovo, near La Spezia. The modern Via Aurelia going though the territory of Italy is the basis for the Highway 1, which also has the same name. It runs mainly along the coast, giving the motorists ranged insights and views of the Mediterranean sea and many beautiful places of Liguria. In many beautiful places there are various opportunities for accommodation. It is no matter whether you want to rent a house or an apartment, you will find here ones in all price ranges. And what else can be desired?

The Ligurian Via Aurelia begins in the former port city of Luni, which has a very long tradition as a port. Already at the beginning of the 2nd century BC marble was shipped from the Apuan Alps. Today, however, Luni has predominantly a very interesting archeological excavation. Having got a little sense of the venerable tradition of the former port operations, it is recommended to visit excavations in order to view it at least once a little closer for a few hours. The Ligurian Via Aurelia comes next after Savona, a city of Riviera, which also was settled early. Today the port is still very important as the famous car Fiat and Lancia brands export their products all over the world, too. There are also very interesting sights like the tower in the harbour named after the sailor Pancaldo, the Church of San Giovanni Battista and the Cathedral of Santa Maria Assunta which are worth visiting.

Other interesting stops on the Ligurian Via Aurelia are Albenga and San Remo.