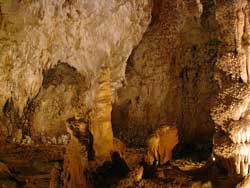 Toirano is a small place situated in the Italian province of Savona on the Ligurian coast. The place is marked by its grottos Grotte di Toirano that have been well-known and can be viewed since 1953. The Grottos are located at the end of Vallone del Varo, the valley of Truth, which is situated between the towns of Alvenga and Finale Ligure. The Grotte di Toirano are under the authority of the community and it is one of the biggest attractions of the Riviera di Ponente. The cave consists of about 70 caves but only three caves are open to the publicity. This includes, for instance, the grotto “Grotta della Basura” and the grotto of St.Lucia “Grotta di San Lucia” that are connected with the help of an artificial channel. It was in this cave the traces of a group of pre-historic people were found. The tracks of Neanderthals are about 12,000 years old.

Among the tracks were found the prints of naked feet and hands in the clay, a knee which was pressed in the soft soil and stone tools. Furthermore, the tracks of a bear in the cave were met as well. They were about 20,000 years old, including paws and grooves on the walls which were drawn with the bears paws. Several hundred meters inside the cave in an absolute darkness there were found the bones of the bears.

Later the caves were used by the Romans as a burial site. In the cave “Grotta della Basura” there are wonderful stalactites and stalactite formations. When discovered the cave was filled with water completely, and then the cave room was drained and prepared for visits. If one goes 120 meters further to the end of “Della Grotta Basura”, he will reach the grotto “Grotte S.Lucia Di Inferiore. The walls are covered with picturesque structures in the form of floral images with aragonite crystals. Another grotto is the “Grotte Superiore Di Santa Lucia”. This cave has been known since the Middle Ages and it has been used since the 15th century as a sanctuary. The things that were found in the caves can be seen in the "Preistorico Museo della Val Varatella" museum.