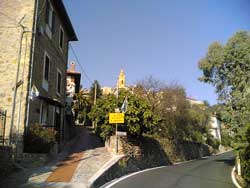 Nearly 500 meters, and lying only about three kilometers away from the Ligurian Sea, with a great view of portion of the Côte d'Azur, the Ventimiglia, and the nearby town of Bordighera. And of course the beautiful scenery of the Southern Alps behind.

It is an idyllic spot that is governed by the prince Georgio I. Principe di Seborga, which actually Giorgio Carbone is, was a florist until 1993. He was chosen among other 320 inhabitants living on four square kilometers to be their prince.

In 1960 Carbone participated in historical research that only convinced him that Seborga hasn't been allocated to any state neither at the Vienna Congress nor in the founding of the Republic of Italy 1946.

The creation of Seborga dates back to the year of 954 when the Cistercian abbot was elected. He was the grand duke, too. There are also historians who claim that Seborga was the first constitutional monarchy in the world and that Seborga can’t be considered to be the part of Italy. Thus Giorgio Carbone argued and later he was elected to be the Prince of Seborga with the convincing number of 304 voices and only four no voices to prince.

Guests who have their holidays on the Ligurian coast or those who has rented an apartment in the hinterland of Liguria should not miss their chance to go to Seborga. Not only its superb location and environment are worth seeing, but also the specifics of the “Principality” are worth to be got to know. Where else in Italy you will see own stamps and currency as not in Seborga?

In the Tourist Information Center a visitor will get a tourist passport, stickers, flags and other souvenirs that are offered only here. Three restaurants offer specialties from Seborga its guests. One of them is the rabbit the secret of the making of which is highly protected.

The Principality of Seborga is a real attraction in Liguria.