Holidays in the Monasteries of Liguria 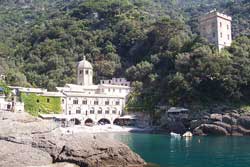 Holidays in the Monasteries of Liguria
(0) marks: 0

Holidays in Liguria are available in different variations depending on your taste, purse and imagination. A lot of tourists prefer a traditional way of spending holidays on the beaches of Riviera dei Fiori and Riviera de la Pontente, the resorts of San Remo or Portofino. Besides lying on the beaches tourists can go on one or two-day excursions to Genoa or Sank Terre. But holidays in Liguria are not limited by traditional tourist guidebooks. Tourists can find unusual suggestions concerning summer holidays in Liguria. They are not very popular but can give you a lot of wonderful impressions. Holidays in the monasteries of Liguria can be an example of unusual but exciting holidays.

It is known to everybody that Italy is a country with strong catholic traditions. Religiousness of the Italians can be seen in the way they organize holidays as well. For example, in Liguria you can rent dwellings on the territory of some monasteries and the rent price is reasonable. Such holidays give you a nice opportunity to study interesting local customs and traditions, legends and local mysteries and even to taste monastery wine, which is produced only there.

Most of the monasteries of Liguria, which offer such kind of holidays, are situated in Genoa, which is the main tourist centre of the region. For example, St. Maria de la CastaÅˆa Abbey is situated in the suburbs of Genoa. It is famous for the historical fact that Pope Piy VII was immured in that monastery by Napoleon. But the monastery does not look like a prison. It is a beautiful villa situated at the distance of half hour walk from the sea. Ather monastery is Del Monte Monastery in Genoa. It is famous for beautiful views of Genoa and its port.

You can rent a room in the parts of cloisters intended for the tourists. It can be a room for one or two people. There is a variant of a big cell for many people. The main effect of such holidays is a unique spiritual experience. Renting price is not high in monasteries but tourists should live and behave according to the rules of the monasteries. That is why you should better make inquiries beforehand getting in touch with the members of the monastery community to escape misunderstanding.